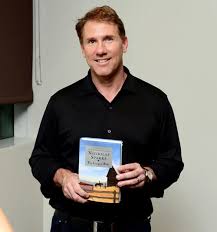 Nicholas Sparks is one of the biggest names in literature today. A guru in the romance genre, Sparks has published 20 books, 11 of which have been adapted into movies.  All Nicholas Sparks books have become New York Times bestsellers, which is a phenomenal achievement. His books have sold almost 100 million copies worldwide, with over 65 million copies in the US alone. Sparks’ renown has grown over the years, garnering his books far more fame than most other authors within the romance genre.

10 of the Best Nicholas Sparks Books

Considered the chart topper amongst the best Nicholas Sparks books, “The Notebook” chronicles the lives of two teenagers, Noah and Ally who meet by chance one summer. What unfolds is a beautiful love story filled with romance, drama, loss and second chances. This tear-jerker is equipt with all the emotions to hook you from the get-go. The fact that this story is based on his wife’s grandparents just make it that much sweeter.

“True Believer” varies quite drastically from most Nicholas Sparks’ novels. The story follows Jeremy Marsh, a reporter who took a trip to North Carolina to debunk a strange rumor.   Marsh’s journey throws him headlong into the arms of a local girl named Lexie. It uses elements of magic and paranormal which rarely appear in Nicholas Sparks’ books.

When a single mother (Denise) gets into a car crash and her son goes missing, she is grateful to the fireman (Taylor) that brings him home. Despite their desire to engage in a romantic relationship, the ghosts of Taylor’s past compels him to push Denise away. With lovable characters and an enchanting romance, Sparks delivers an amazing love story in “True Believer.”

While grieving for his passing, Julie is surprised to receive two gifts from her deceased husband: a Great Dane puppy named Singer and the promise to watch over her. Years later, she becomes infatuated with two men, a handsome stranger, Richard and her husband’s best friend, Mike. In growing closer to one, she draws the anger of the other. “The Guardian” features a lot of action, making for a surprising intense yet tender love story.

Written in the first person by the male protagonist, US soldier John Tyree, he tells the heartwarming story of his love for Savannah, whom he meets by chance on the beach. His love for her allows him to get his life on track. While “Dear John” tends to divide Sparks’ fans, the novel is still considered one of the best Nicholas Sparks books.

Alex, a recently widowed father of two, falls in love with Katie, a stranger curious about his town and its mysterious past. When Katie’s past comes calling, it challenges everything they have built. “Safe Haven” tackles the very touching subject of spousal abuse with a lot of tact. It complements the disturbing story of Katie’s past with a thrilling climax filled with action and suspense.

Following the death of his wife, Miles struggles to stay strong for his son Jonah. It is only after he meets Jonah’s teacher, Sarah, that he’s finally able to move on from his wife’s death and feel alive again. “A Bend in the Road” is a roller coaster of emotions, exploring the death of Miles’ wife and the nefarious forces that threw his life into chaos.

The list of the best Nicholas Sparks books would be incomplete without mentioning “Message in a Bottle”. This is a story about Theresa, a recently-divorced Boston Times columnist who finds a bottle washed up onto the shore. Inside it, she finds a letter written to Catherine by a man named Garrett. She prints the letter in her column hoping to touch readers as much as it had touched her. In doing so, she finds her soul mate.

When Gabby moves in next door she challenges Travis in every way; his fascination with her turned his perfect life upside down. “The Choice” is a sad story about a touchy subject that draws readers into its protagonists’ world and makes them wonder what they would do if they ever found themselves in Travis’ situation.

“A Walk to Remember” is a haunting psychological love story between two high-schoolers, Landon and Jamie. This story explores the nature of romantic experiences and raises questions about unending love even while motivating readers to seek their soul mates. “A Walk to Remember” is a beautiful and heartwarming story of young love that will surely leave you with soggy Kleenex at the end.

With so many popular books written to date, it is a difficult task to narrow it down to just ten of the best Nicholas Sparks books. This is not only because of the large number of books he has written, but also because of the varying tastes most people have.  If you’re already a fan of the author, you’ve most likely enjoyed most (if not all) of the titles mentioned above.